skip to main | skip to sidebar

I turned 30 years old last week. For 23 of those years I've lived in Winnipeg. Which is sometimes a very frustrating experience. I chose to live downtown, love downtown, but have seen the world and studied enough to know that what we have built is a bad joke of a city. It doesn't have to be this way. With some political forsight, some willpower to challenge this city to break its bad habits, and a bit of patience, we can honestly make it an urban place to feel proud of, instead of an urban place that feels like an accident.

What I've done is compile my thoughts into a nice handy list. Some are admitted long-shots, while many could be implemented tomorrow. There are lots of ways for our leaders to start making this place a better place to live. I'm tired of being embarrassed about this city. I'm tired of traveling the country and having to defend its modest intentions to people who can't help but laugh at our collective ineptitude.

Seriously, its gone on long enough.

I've moved away, and moved back, and moved away, and moved back again. And now that it looks like I'm going to be here for a while, I would be ever so grateful if you could start doing the things that will make this a properly functioning city. Because right now it behaves like a child in a small town. I'm tired of watching this place settle for second-best, for average, for mediocre. I want to excel at what I do, and I want to see those around me excel. And I think we can do a much better job.


a) A plan.
Where does it state what kind of developments we would like to have in which parts of the city core?
Where does it state that certain kinds of developments simply are not allowed?
What are our urban design values?
What do we want this city to look like?
Will these plans include the broader neighbourhoods surrounding downtown?
Will we communicate these plans with industry to effectively bring them to fruition?
Will we have the courage and will to see the plan through?

Will we give the organizations that oversee this development the proper tools and powers to enforce our standards and plans?

Strip-malls on Corydon, parkades on Main, a sea of surface parking lots: none of these should be acceptable. We must respect our urban environment.


b) The end of Unicity.
Seriously. Its been 35 years that the suburban votes have dictated the fate of this city. And we are the poorer for it. Recent mini-revolts amongst the commuters against various residential projects has sealed the deal. I no longer want my beloved city at the mercy of people who have no idea how cities are built, how they function, or the little things that go into creating a vibrant urban experience.

The boundaries should be returned to their original lines. Let Fort Garry or St. James or North Kildonan voters pay their own taxes for their own hideous sprawl. This has been borne at the expense of the inner city for too long.


c) Residential at the Forks is a natural fit.
Build it! This also applies to every damn parking lot and open corner of unused space in this town. Until its full of people, not full of cars, it will continue to be a dysfunctional and embarrassing downtown. (Note to the kneejerk anti-development crowd: a parking lot is not green space. You're not preserving anything but your need to drive everywhere.)


d) The end of Centre Venture.
This organization used to do so much good, when run by Annette Stenning. Now they've become a publicly-funded demolition company for everything north of City Hall. Combined with a penchant for insultingly benign architecture, they have now proven their uselessness and have outlived their mandate. Get rid of 'em.

Barring a complete dissolution of the organization, a new board and a new CEO with a more positive and community-building vision would be a good place to start.

The irony that their most incensitive projects have been for organizations funded by the provincial government is doubly frustrating.


e) Rapid transit.
Can Katz convince the slow urban minds of the provincial NDP that Light Rail is even more beneficial than BRT? BRT is a good start, but it doesn't go far enough, and we all know it. Katz surprised me by supporting BRT, but has surprised me more by rightly saying LRT is the way to go. Will he seriously work to make it happen?

LRT is more environmentally friendly (not diesel dependant).
LRT will inspire Winnipeggers much more than BRT, which will just be another half-hearted joke.
LRT has the opportunity to seriously attract development that can be designed and graciously integrated into the urban fabric. BRT is a much harder sell for condos/apartments/commercial.


f) Living downtown should be a job requirement for anyone involved in downtown revitalization organizations.
If you don't have a personal stake in the neighbourhood you're trying to improve, how can you fully understand the intricacies or connections or history that has made it what it is and will shape it in the future?


g) Waverly West
That the NDP acknowledges that Waverly West turned out to be a complete sham and that they apologize and will now build the equivalent number of residences downtown. (Hey, a man can dream, can't he?) That a provincial government got in cahoots with a private developer for a piece of land 30 years in the sprawl-making to pull such a fast one on the citizens of Winnipeg is insulting.

I should make my old emails with Tim Sale public (then the Minister in charge of the project). The level of backpeddling by the NDP has been unprecedented.


h) The End Of Rent Control
You say "But haven't you always been a renter?" Yes, I have. But I'm also aware that artificially suppressing the market has not resulted in anything but problems. People manage to afford higher rents in other cities just fine - and funnily enough, those apartments are better maintained. Rent control has stymied new infill in city centre neighbourhoods and encouraged more single family homes in the suburbs.

By trying to supposedly help Winnipeg's poorest citizens, rent control actually gives them fewer options because more apartments get turned into condo's or outright closed up.

Playing hopscotch with basic supply and demand economics has resulted in the current housing crisis where vacancy is dangerously low. (While the government builds houses in the 'burbs). Yet more insultingly, when a developer does try to build apartments (see the Upper Fort Garry/Gord Sinclair/Manitoba Club fiasco, North Kildonan NIMBY's, or holding back The Forks) the city shuts them down.

A more effective program to assist the poor can be created to ensure that no one is left out in the cold. Rent control must end.

Very simply, they need to be taxed higher. And at the same time the city needs to create a an enticing incentive program to encourage 3-5 storey streetfronting mixed use developments throughout downtown.

Every block needs to be filled in.


j) Give the Downtown Design Review Board back its teeth
The current WHRA building on Main Street has now been publically decried a fiasco. Understandably so. The Design Review Board was created to prevent situations such as this, and in their report requested many changes. None were implemented. CentreVenture got their monstrosity, and a provincially funded health organization got the ugliest new offices in Western Canada.

I met with Ross McGowan (CEO of CentreVenture) several months before demolitions began. He has become a professional at giving lip service to historic concerns and understanding what makes vibrant streetscapes. His quote in the FreePress saying the new building is an improvement should cost him his job.

The Downtown Design Review board's catchment should be extended to include St. Boniface, Crescentwood/Fort Rouge, Osborne Village, The West End and Point Douglas. The core of this city needs a cohesive vision, and complementary urban design values.


k) Term limits for City Councilors
3 terms max. And even that feels generous. Anything beyond that and they all start coasting. This city NEEDS new ideas, new energy, fresh blood and invigorating debate. Too many counclilors have spent too long doing too little.

Without a government/opposition framework at city hall, there needs to be more democratic accountability. The current system is not working.

Pay raises me be in order as well, to help entice more professionals into City politics.


l) The Province MUST stop building/funding projects with insensitive parkade demands.
Here's the catch: provincial employee unions require parking in their agreements. So its not even a political issue as much as a labour one. Funny that these unions require their members to make this city and this planet a more polluted and less pedestrian-friendly place.

The provincial government needs to take some urban planning courses.

Waverly West, WRHA, Sport Manitoba's proposal, a parkade on King Street proposal, supporting BRT instead of LRT -- all of these show that the NDP is actually quite suburban and stuck in the 70's.


f) A quaint, well-designed 3-4 story street-fronting mixed use building built by a private developer to replace the rent-a-car lot at the corner of Ellice & Sherbrook.
Posted by Louis Riel at 6:52 PM

Music For The City 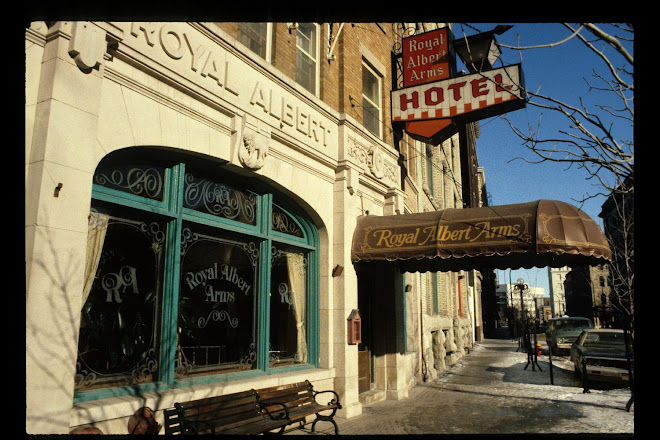